The ultimate solution for packet storage

It's a two-in-one design of the packet wallet. The playing card bag comes with 10 slots that can store more than 50 cards in total. The Accordion-style multi function bag also has several features that the previous one did not have.

The ultimate solution for packet storage

A packet trick is a very particular type of effect in the card magic world. The magician uses only a few cards to utilize a few simple sleights to create a fascinating illusion. Thus, it is a must-have -- or we can say "everyday carry" in magicians' lives.

Normally a packet trick only contains four or five cards - they can be easily damaged by bending.

To solve this problem, TCC designed a multiple packet wallet and it received a lot of attention. However, these soon sold out. Since then, we have not produced such a packet wallet because we have been exploring more scientific methods of carrying packet tricks.

It's a two-in-one design of the packet wallet. The playing card bag comes with 10 slots that can store more than 50 cards in total. The Accordion-style multi function bag also has several features that the previous one did not have.

1. The accordion-style design can perfectly show all your packets. Therefore, all the packets will be immediately unfolded right in front of your eyes at the moment you open it. This enables you to better locate and remove the packet or gaff card that you wish to use as quickly as possible.

2.More compact storage. Accordion-style packet slots will automatically collapse when the packet storage side is closed. This protects your packets, making them straight and flat.

3. Helps protect the secret use of packet and gaff cards. You wouldn't want to simply remove the packet from the bag - audiences might feel that the packet has been prepared in advance. However, if you first take out the normal deck to perform a few tricks, and later you take out the packet or gaff card from the other side during the offbeat, this will greatly reduce the possibility of being suspected.

That is why we call it the "ultimate solution." We hope that it can bring you as much fun as we think you'll have, whether for performance or daily carry. 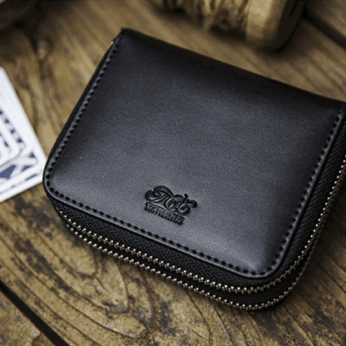 You're viewing: Accordion-style multi-function bag by TCC $22.00
Add to cart