For the first time, the unfiltered genius of John Cornelius in one collection—including the magic that made him a FISM winner.

Aaron attended a magic seminar in Vegas for his 21st birthday party, and during the evening met John Cornelius for the first time. He watched him perform a simple visual trick with a cigarette that fooled him BAD (his mind was reeling so hard he completely forgot it was his birthday for a few hours!)

That was Aaron’s first taste of the Cornelius ‘genius.’

As a FISM winner, John Cornelius is famous within magic for his remarkable routines that really are genius—and even more impressive when you discover the devious methods behind them.

But for years, magicians struggled to keep up with Cornelius and his brilliant ideas. His routines and thoughts were scattered across various old newsletters, magazines, and forgotten manuscripts.

That’s why all the CC team were delighted when Award Winning Magic—a collection of Cornelius’ best magic—was published, because we could finally discover the extent of his magical genius.

When you read Award Winning Magic, you’ll discover this genius for yourself. Cornelius doesn’t limit himself to cards, but instead covers EVERY aspect of magic—-including incredible magic with ordinary objects you’ll find everywhere. You’ll also find a whole new revolutionary card stack system that will become one of the strongest tools you have.

John’s ideas are so strong that any ONE of these tricks alone are worth the price of the book.

The Award-Winning Magic of John Cornelius. There is no hyperbole in the title of this book, as much of the magic contained here gained its John not only accolades from his peers, but one him one of magic's highest honors-a world prize at F.I.S.M.-as well as being the only American to win the World Championship in Magic in two different categories and the only person to win the International Brotherhood of Magicians Creativity Award three times!

Thomas Edison, who knew a thing or two about the subject, said that genius was "one percent inspiration and ninety-nine percent perspiration." In The Award Winning Magic of John Cornelius, genius is apparent at every turn of the page.

John Cornelius is one of magic's most innovative performers and inspired inventors and his effects and routines are in use by magicians the world over. In this long-anticipated book, author Lance Pierce explains John's magic in meticulous detail, covering everything from legendary effects such as "Marked For Life," "The Fickle Nickel" and the ingenious "Shrinking Card Case" to every last nuance of John's world-championship winning card act, "Every Card Trick In The World In Ten Minutes."

More than just a magic book, The Award-Winning Magic of John Cornelius is a journey into the mind of one of the foremost magical thinkers of our time, a man many have hailed as a creative genius. 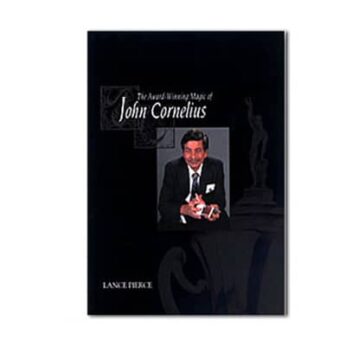