Call of the Wild

Aaron first met the creator of this trick, John Bannon, in the early 90s. John has since become known as one of the most ingenious creators of card magic—and this trick is the perfect example of why…

John Bannon’s iconic take on the Magician vs. Gambler plot, Call of the Wild is the finest ‘Wild Card’ routine you’ll ever find. The trick begins with 8 blank cards and a single Ace of Spades—but soon escalates into an extraordinary set of productions.

Your opponent turns four blank cards into the Four Aces—but you do one better and produce a Royal Flush (out of nowhere!)

The first time we saw the crazy ending to this trick, we had to take a seat (not a joke!)

Bannon's innovative routine takes the Wild Card plot into the next century and beyond!

This entertaining, updated, version of the classic Wild Card plot has all the qualities of a perfect routine. It contains a solid story based on the classic Magician vs. Gambler conflict and a new triple climax.

The contest begins with eight blank cards and the Aces of Spades. The gambler's blanks change into Aces of Diamonds, Clubs, Hearts, and Spades and in a truly unexpected climax, the magician's aces change into a Royal Flush to win the contest! Comes complete with poker-size, Bicycle cards and photo-illustrated instructions. Sleight-of-hand required. 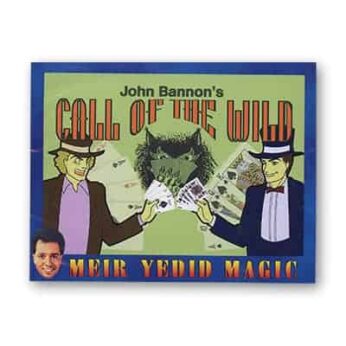