Can you follow the blue card to win a dollar? The most popular 3 Card Monte of the century requires next to no sleight of hand—but still fools every audience it meets with its twists, turns and HUGE kicker ending!

All the coaches at Conjuror Community have used this classic monte at one point or another in their professional shows, for one simple reason—it delivers EVERY time.

But the true beauty of this monte is its presentation—the trick is performed alongside a wildly entertaining story that will at once engage and distract your audience...taking ALL the heat off your hands.

Unlike other montes, Color Monte will win the audience over to YOUR side—just in time for you to floor them with a kicker ending they never saw coming!

The magician displays three cards-one with a blue spot and two which have red spots. He explains that the cards are used to play a game of chance, the object being to keep track of the card with the blue spot. If you find the blue card you win a dollar, but if you`re wrong then you owe a dollar. He and the spectators will.

He goes on to relate how he was once taken by the game and shows how quickly he lost three dollars. Every time he thought he had the blue card it ended up being the red! Frustrated, he accused the man of not even having a blue card in his hands, but when it was shown on the bottom he lost another dollar! Trying to catch the hustler again, he stated that if the card was on the bottom it couldn`t possibly be on top, but was wrong again and lost another dollar! In a last ditch effort he guessed that it couldn`t be the center card, but once again lost another dollar! His running total was now up to six dollars. Continuing, the performer tells how he told the hustler that he thought more than three cards were being used, but was once again proven wrong and he lost another dollar! Being the gambler he is, he tried one more time, double or nothing. The hustler clearly showed one card with a red spot, a second card with a blue spot and stated all the magician had to do was guess the color of the third card. Red, right? Wrong again-the card isn`t red or blue, but a surprise card no one will expect!Comes complete with the three necessary cards printed on Bicycle stock and detailed instructions. 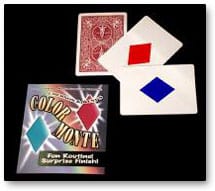