Dobbo's Dollar by Wayne Dobson in association with Alan Wong

10 tricks that last up to 10 minutes and built into one coin!

Dobbo's Dollar by Wayne Dobson in association with Alan Wong

10 tricks that last up to 10 minutes and built into one coin!

AT LAST! The King Of Magic gets his own coin! This is a fun item for collectors and performers alike. It's a dollar-sized coin bearing the profile of one of the UK's magic stars of the 20th Century - but in true Dobbo style it has built into it 10 (count 'em) magical revelations and sight gags. This means that with this on you, you are armed to entertain, climaxing with a genuinely strong magic effect! This fine-looking silver coin was specially produced for Wayne by Alan Wong, who came up with the original idea. Bob Gill's nicely written instructions provide you with a multitude of ideas to use. But this still leaves plenty of room for you to add your own effects to use with this unique coin.

Wayne Dobson wrote: "Ages ago Alan came up with the idea to produce a Wayne Dobson novelty coin containing several effects within its design, and he's persuaded me to let him put one together. We worked together on various designs and possibilities to be built into the coin. I must say I'm really pleased with the result - but then I would be: it's got my silhouette on it! And Alan has been very complimentary in making it look delightfully young. I took some sight gags I'd gathered over the years; a few are original with me, some are very old and have become modern standards of magic. Some I researched in classic books by the likes of Martin Gardner and Banachek. The coin is not gimmicked as such; it is a novelty coin bearing the face of one of the UK's greatest magical stars that has a combination of sight gags and psychological forces and revelations built into its design." 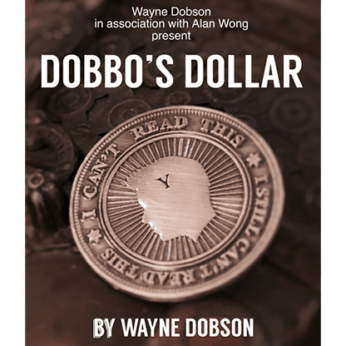