For Your Entertainment Pleasure

The ultimate collection of commercial miracles from Daryl, one of the greatest magicians we’ve ever known.

For years, the secrets of Daryl’ visually stunning and devastatingly fooling miracles remained a mystery. Since this book was first released, the magic world has never been the same.

When Alex finally got his hands on a copy of For Your Entertainment Pleasure, he was shocked—how could such a small book possibly contain the incredible magic of a master like Daryl?

But the minute Alex started reading, his jaw dropped with astonishment (and stayed that way for the rest of the book!)

There were so many ‘WOW’ moments packed into such a small book…it was the most astonishing thing he’d ever seen.

Adam loves this book too—from the commercial masterpiece ‘Sponge Rabbits’ to the ultimate four King assembly ‘Rising Crime,’ this book is proof of Daryl’s genius. He took simple concepts and elevated them to new heights—creating effects that would live in the memories of audiences—and the repertoires of virtually all great magicians —forever.

Originally published in 1982, For Your Entertainment Pleasure helped set the tone for what card magic would look like in the Eighties, and beyond.

FISM Champion Daryl, "The Magician's Magician" detailed some of his finest original material here for the first time. There are classics like the Rising Crime Display, Daryl's Snowshoe Sandwich, and his sponge ball routine, all of which foreshadowed much of today's magic. There are also forgotten gems here, like Daryl's Coin Across and an astounding prediction effect using the four Aces.

Table of Contents:
Papa Rabbit Hits the Big Time - Believe it or not, this is an engaging, deceptive, and hilarious handling of sponge rabbits.
The High-Priced Spread - A beautiful but challenging routine featuring a one-handed Ascanio Spread.
Rising Crime - The centerpiece of this routine has become a modern classic and a principle used in many other great routines.
Future Acethetics - A deceptive and commercial prediction routine using the four Aces.
Sleightly Touched - A psuedo memory routine with a blockbuster ending.
Twogether Again - Daryl's take on "Coins Across".
The Coinditional Coin Game - A funny routine that has elements of a Copper/Silver Transpo.
The Out-of-Body Experience - Described as a "remote" sandwich routine, this is direct, visual, impossible magic.
The Snowshoe Sandwich - A routine that was wildly popular in its day and part of Daryl's FISM act.
Psychological Ace Assembly - One of the strongest treatment of a classical Assembly devised. No extra cards or gaffs. Just gorgeous construction and sleight of hand. 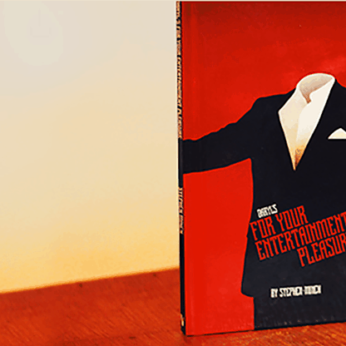 You're viewing: For Your Entertainment Pleasure $30.00
Add to cart
Create a new list