Card changes are still viewed today as one of the strongest moments you can offer your audience with just one card.

Imagine with a single card, changing the card 4 times visually and seen in front of the spectators, and leaving the card for examination. With Meta-morph this and possible.

Card changes are still viewed today as one of the strongest moments you can offer your audience with just one card.

Imagine with a single card, changing the card 4 times visually and seen in front of the spectators, and leaving the card for examination. With Meta-morph this and possible.

You take out or envelope or your wallet and you specify a prediction and inside. You make 4 spectators choose 4 cards, and you tell them that each choice he makes to choose their card, you had planned everything from the start. You take out your prediction and the first and correct card, you fold the second correct card as well, the third also and you end with the last change which is also correct and give you the card also early for examination. Show you a banknote and tell the spectator that this and a bet, put the bill in an envelope or something, and let you see that.

Explain to the spectator that he is going to choose a card and that if you cannot find it, he can keep the banknote. He chose a card and lost it in the game, you take out your prediction which is wrong, you tell him that money and in play then you are entitled to 3 chances, you fold the card and it changes into another which and bad also, you fold again and the card and bad again, at this moment there tells you to them that you prefer to quickly recover your note and the card this change saw in bank note, to give you the note as early to examination and you take out the chosen card from the spectator in the envelope where to find the banknote, magic the banknote and more the and their card and inside. Have you choose a card and you have it signed, you lost it in the game and take out an envelope and you tell them that in there is a card, you take it out and show a 3 of Diamonds, which and not theirs, you fold the card changes to seen 3 times and arriving at the fourth change saw the spectator sign card appear which you can leave as a souvenir.

"Axel has created a stunning visual effect that looks like CGI. So magical and very visual!!!"
- John Carey

"A great magic trick is one that can be described in a single sentence. Axel's creation brings together all the ingredients to make it memorable!" For short: "A simple, strong and memorable effect, and that's how I love them!"
- Carlos Vaquera

"Meta-morph is very visual. Whether you use it in your virtual or live shows, people will be speechless (especially if they're on mute)"
- Michel Huot 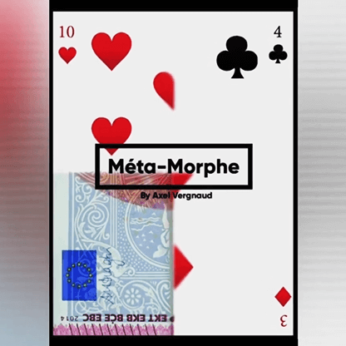 You're viewing: Meta-Morph by Axel Vergnaud $29.50
Add to cart
Create a new list