The precision gimmick is customizable. Any playing card, money, or written prediction can appear folded up inside the box.

A card is freely chosen and signed by a spectator, then shuffled back into the deck. Say, "I'm going to find your card in less than 5 seconds without even looking at the cards!"

Hold the deck behind your back for a few seconds, then bring it out and say, "I found it! And guess where it is?" Point to the small box that has been on the table as you claim, "It's inside the box!"

This seems completely impossible because the box has been in full view the entire time, and no one has touched or even gone near the box!

Pick up the box and bring it towards the spectator, saying "Please remove the lid." When he takes off the lid he will see a folded card inside. Dump out the folded card and place the empty box on the table. Unfold the card and watch the shock when he realizes that it is indeed his signed card!

This latest version uses a modern pagoda style box with many new features...

The precision gimmick is customizable. Any playing card, money, or written prediction can appear folded up inside the box.

The folded item looks real because it is real. The gimmick allows you to use real cards, real money, etc. instead of a printed fake. The "3D" folded look is perfect in this new version!

The box has the most precision hidden gimmick we've ever built and can be completely examined with no clue as to the mystery's secret.

Mystery Box comes with a folded Bicycle® playing card gimmick inside. The instructions teach you how to quickly and easily replace it with any folded card, money, or prediction insert.

Prediction Mystery Box: Any thought-of person, place, or thing is predicted on a folded slip of paper inside the box!

Money Mystery Box: Place a small box down on the table. Borrow a dollar bill (or any paper money) from a spectator and have him sign it with a magic marker. Fold it up as you ask, "Is this the dollar bill you gave me?" When he confirms, say "Thanks!" and put it in your pocket.

Continue, "You can have your dollar back, or you can trade it for what's inside the box." Point to the box resting on the table. Whatever he chooses he's in for a shock... Slowly reach over with your empty hand and bring the box over to the spectator. "Please remove the lid." He does so and sees a folded bill inside. Dump it out and let him unfold it - it's his signed bill! 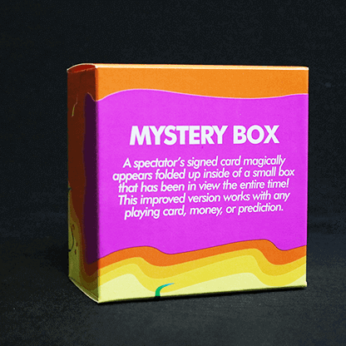