Dai Vernon’s personal guidebook to The Expert at the Card Table —the most important card magic book of the century. Photos of Vernon’s hands make all the difference in the world!

This book is part of a true magic legend...

Dai Vernon (The Professor) used this notebook to record all his inner thoughts, instructions, advice and discoveries on the most important card magic book of the century—The Expert at The Card Table.

After Vernon passed it to a dear friend for publication—that ‘friend’ vanished, along with the unpublished book.

Elite card magicians all over the world knew that this was the ONLY copy—and for decades, believed that Vernon’s priceless advice would never see the light of day.

When the book finally appeared, 20 years later—Aaron was one of the many card magicians who were shocked, thrilled and elated by its sudden appearance!

However, Revelation soon became the most controversial book in the history of card magic because parts of it were still missing.

Recently, the mystery was solved, and Revelation was at long last released in its complete and ‘redacted’ form. Best of all, this edition actually includes the long lost original photos of Vernon’s own hands. For anyone with a sincere interest in this topic—this book is the single most important thing you could ever see.

You see, The Expert at The Card Table is a famously difficult-to-read book. But now, you can actually SEE Vernon’s hands as he guides you through it.

Revelation is like taking a one-on-one lesson with Vernon. For that reason, this is one of Aaron’s personal favorites. If you love true magic with cards—we believe you’ll feel the same way.

This is not a reprint of our 1984 edition of Revelations, Dai Vernon's legendary annotations for The Expert at the Card Table by S.W. Erdnase.

This new, over-size book was triggered by the discovery of more than 160 long-lost photographs of Dai Vernon's hands that were taken in 1961 specifically to illustrate this manuscript. It is as close as you will ever get to a personal session with the Professor.

THE BOOK INCLUDES
A facsimile reproduction of the entire, original typed Revelation manuscript.

The entire text of The Expert at the Card Table with Vernon's annotations inserted at the appropriate places illustrated with the newly discovered photos of Dai Vernon's hands.

Pages: 392 - 9" x 11.5" - Hardcover - The book bound in green cloth and stamped with copper foil, and the beautiful dustjacket were designed by Michael Albright. 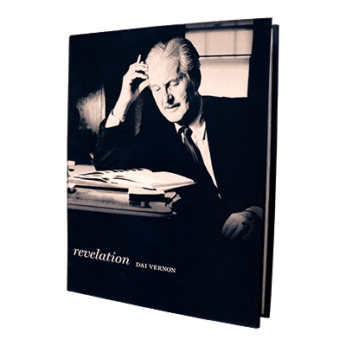 You're viewing: Revelation $75.00
Add to cart
Create a new list