The Clarity Box by David Regal

The quality of The Clarity Box is exquisite. Custom-fashioned from thick, sparkling acrylic it has the look of a miniature museum showcase.

Card to canister... with a clear difference.

When unveiled at The Magic Castle, magicians returned over and over to watch the moment that seemed impossible... when a card that had been isolated within a clear box turned out to be a spectator's signed selection.

The folded card was never out of sight. It was spilled out of the box and cleanly unfolded, yet it was the signed card.

That, in essence, is The Clarity Box.The object need not be a card. It can be a signed bill, or a prediction - truly a utility prop.

This twist on Bruno Hennig's classic card-to-canister effect possesses a clear difference: The object that is to be visibly spilled from the container is in plain view at all times.

The quality of The Clarity Box is exquisite. Custom-fashioned from thick, sparkling acrylic it has the look of a miniature museum showcase.

"David Regal's Clarity Box is the most magical revelation of a playing card I have seen. Trust me on that."
- Dean Dill

"Every once in a while, magicians strike gold. David Regal has created and produced the perfect close-up illusion."
- Jim Steinmeyer

"There have been several versions and improvements on the Bruno Hennig card box, but David Regal's version is one that I feel Bruno himself would highly approve of. It takes the effect to a different level. I'm certainly going to use it and if Fred Kaps were alive I'm sure he would do so also. It's the ultimate answer to an already ingenious revelation."
- Johnny Thompson - aka The Great Tomsoni

"The illusion is so complete, your brain will not even think 'switch'."
- John Bannon

"Brilliant. So good you'll perform it for yourself."
- R. Paul Wilson

"I am very impressed by the thinking that went into The Clarity Box. David Regal is diabolical."
- Lance Burton

"David has taken a major step forward with Clarity; he's really thinking "inside the box." Nothing is hidden, everything is transparent - except the method! Bruno Hennig and Fred Kaps would themselves have been fooled."
- Simon Aronson

"Illusions are never clear; this must be magic."
- Dave Buck

"With The Clarity Box, David Regal has taken a classic trick that was already perfect... and made it BETTER."
- John Lovick

"This is really clever. I want one!"
- Eugene Burger 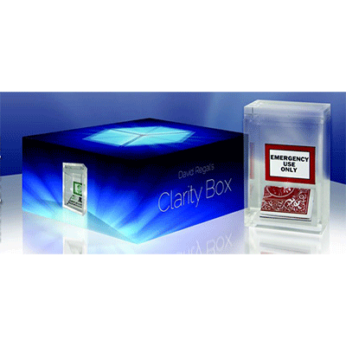 You're viewing: The Clarity Box by David Regal $80.00
Add to cart
Create a new list