The second volume, The Lost Legends, in The Davenport Story series unveils three hitherto unpublished works by eminent authors who were close personal friends of the family. These works were only recently discovered during research for this series.

The second volume, The Lost Legends, in The Davenport Story series unveils three hitherto unpublished works by eminent authors who were close personal friends of the family. These works were only recently discovered during research for this series.

The first by Robert Harbin, 'Magic Marches On,' was acquired by Davenports in 1946. Initially its non-publication was mainly due to manpower shortages in the immediate aftermath of the war. Then, with the sudden passing of Gilly, the manuscript was genuinely lost. It was not until 1996 whilst researching this series of books that it was discovered amongst Gilly's papers. This work includes 42 never-before-published tricks, illusions and escapes. Among the ingenious magical novelty effects are Glass and Cloth Eating, a Canon Ball Production and a completely new method for the classic Clock Dial trick. There are 14 new illusions, and one, 'The Middle Bit,' ingeniously incorporates five different effects.

The second, Edward Victor's lost fourth book, 'With Magic Hands,' adds to his famous trilogy and thus completes his series. Again, ill luck conspired against its publication. At the time he sold it to Gilly Davenport, Gilly was an ill man and was to pass away shortly afterwards. The manuscript was then lost amongst the heap of papers in his private office at home. There are chapters on Sleights with Cards with a Straight Deck and with Prepared Cards together with new routines for the Cut & Restored Rope and Cups & Balls feature, plus new effects with a paddle and other novelties.

Finally, the last work, 'Mystia' or 'The World of Magic,' is by the accomplished author and inventor, G. W. Hunter. This was written at the end of the 1880's and in this work, we are convinced that to have been able to describe how these superb effects were done, Hunter must have had access backstage. It was probably because of this espionage that he resisted publishing or parting with this work until shortly before his passing in 1939. The author analyses and reveals the secrets of the tricks of 36 leading magical acts in an era where innovative presentation was of the highest order. Acts include those of de Kolta (with actual drawings of his Chair illusion set up), Maskelyne, Kellar, Bertram and Alexander Herrmann. The last chapter holds a number of surprises.

The front cover of the volume replicates a publicity photograph of Harbin which was inscribed, 'To George and Family - Robert Harbin 1946.' George of course, was his friend Gilly Davenport. This photograph was taken at the same time as the manuscript was purchased by the Davenport family. 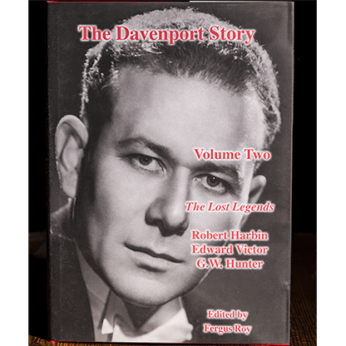 You're viewing: The Davenport Story Volume 2 The Lost Legends by Fergus Roy - Book $125.00
Add to cart
Create a new list