In this book Luca Volpe will explain three professional routines that he has performed all around the world for live shows and TV.

In this book Luca Volpe will explain three professional routines that he has performed all around the world for live shows and TV.

A deck of blank cards with 50 motivational words on them, is mixed by the audience, and five randomly chosen people each select a word. You not only are able to reveal each word (every time in a different fashion), but also the last word is revealed in a spectacular way that nobody expects!

A beautiful performance of contact mind reading which will involve the whole audience! A staple in Luca Volpe's theater show that will guarantee you incredible reactions! Before the show, a few members of the audience write their name and a random object on a card. All these cards are collected and separated into two boxes - male and female. A randomly chosen spectator chooses one card from the face down female group and one from the male group. Each card is isolated in an envelope and then mixed up. You are then able to find out, through your intuition, which envelope contains the female card. Then the spectator removes the card from the envelope and, without saying anything to you, you are able to not only find the owner of the card in the audience, but also reveal the object written on it!

A.W.A.N.D
ANY WORD AT ANY DATE

Show a stack of 31 blank cards with a motivational word on each one of them. A sealed red envelope is passed through the audience and a spectator says "stop." That spectator states his day of birth and another spectator deals down the number of cards until he reaches that number. That word is predicted in the envelope that the spectator was holding from the beginning! A very engaging routine, that can be tailor made also for corporate shows. Only this routine is worth three times more than the price of this entire book!

An impossible prediction, where you predict one week in advance which sentence will be chosen in the magazine of the day! A classic with a new twist!

The book is 34 pages with a color, glossy cover.

Full live and TV performance rights included with the purchase of the original book.<br.
"My friend, Luca Volpe, is a real pro. Besides constantly working live shows, he is also known for his TV specials. He is a consummate artist! Now Luca has decided to begin a series of smaller booklets, beginning with Triad, explaining the amazing routines he has created for his professional performances and television appearances. They are all remarkable and use the simplest of props, usually blank cards, a couple of Ikea folding boxes and the like. And yet, with these basic materials which you can readily attain (Luca even gives you websites to help you out if you need it), you can demonstrate predictions and mind-reading of the highest order that will leave your audience stunned! Best of all, any moves or "devices" are so well covered, you never have to worry about the mechanics. As a matter of fact, Luca uses classic ideas combined with time misdirection and the like, which should serve as an invaluable instruction on how to construct powerful routines. Plus, Luca also gives some wonderful ideas to make your performance a strong promotional tool such as using a word from a client's own promotional material as your target word and then giving him the cards used inside a black envelope with your name and info printed in gold! What a great idea!
Invest in Triad! This is great stuff you will actually use!"
- Richard Osterlind, 2020</br. 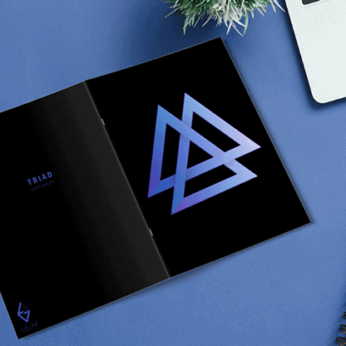