In this book, Juan Tamariz shares secrets and techniques you won’t find anywhere else in magic—including how to fool audiences of THOUSANDS using nothing but your voice.

BACK IN THE STORE!

Verbal Magic is one of the most uniquely amazing magic books of all time—when you read it you’ll discover techniques and miracles that you never even THOUGHT were possible (techniques that you can’t find in any other magic book!)

...where the audience creates the magic, and you never touch a single prop.

Aaron knows exactly how powerful this style of magic can be—as a young magician, he was regularly fooled over the radio by Juan Tamariz’ weekly broadcast show. Juan would ask his listeners to take a pack of cards and follow his simple instructions...and somehow still create miracles that baffled even the most experienced magicians.

Aaron was beyond excited to get his hands on Verbal Magic when it came out—so he could finally understand HOW Juan fooled him so hard using nothing but his voice.

He was stunned by what he found!

This book single-handedly does what no other book has...it shows you exactly how to make self-working tricks feel like ‘real’ magic.

When it happens in their hands -

It's an old adage of conjuring: The strongest magic happens in the hands of the audience.

A lesser-known corollary to this is: The more that happens there, the stronger the magic.

So what if it all happened in their hands?
What if the magician wasn't even in the room?
What if only his voice were guiding them...
From the radio - or the television - or from far away?
- and the magic happened while they did everything!

That is what Spain's greatest magician, Juan Tamariz, asked himself. And from this question sprang a body of magic that has astonished vast audiences in Spain and Latin America when performed on radio and television, on stage and close up. It is magic that has fooled both the public and master magicians.

Using only a few playing cards, pieces of paper and other common objects as props, audiences are led through a variety of entertaining processes that lead to their utter amazement. Through clever principles, old and new, combined with cunning psychology and ground-breaking strategies, Juan Tamariz makes magic happen in everyone's hands. He fools people into amazing themselves! Further, as you follow the radio transcripts in these pages, he will fool you, too.

So open this book and join the amazed. Then share the amazement and fun with your audiences, whether they are listening to the radio, watching television or in the room with you.

Follow along as Juan Tamariz tells you to take a few red and black cards from a deck and mix the colors in ways random, chaotic and independently determined. Yet, when you are finished, the colors magically separate! That's right, you perform Oil and Water for yourself and have no idea how it happened - just as thousands of people have done while listening to Juan Tamariz over the radio, on television and in live audiences.

People freely choose a card, lose it in a packet, mix the cards thoroughly, and then magically discover their own selections-without knowing how they did it. The magic leaves Tamariz's hands and settles in their own!

This book collects over forty such tricks and presentations, all refined and tested through professional performance. Close associate Gema Navarro, under the guidance of Juan Tamariz, has meticulously transcribed presentations from tapes of numerous radio broadcasts. The transcripts are so detailed, they first let the reader fool himself, and then give him the information necessary to entertain and astonish his audiences, and the tools to devise many other effects that happen entirely in their hands and heads.

Scattered in the literature of magic is a scant number of participation effects suitable for performance on radio and television; and those tricks are sought and coveted by professionals. In Verbal Magic Juan Tamariz reveals the largest body of such magic ever offered, while taking it in new directions and teaching new principles with wide-reaching possibilities for further application. He also shows that this type of magic is just as astonishing when performed close up and for theater audiences. As a final bonus, Verbal Magic provides the largest record yet, for non-Spanish speakers, of what it is like to be part of Tamariz's audience. Here is a long, in-depth look at how a master magician simultaneously entertains and mystifies. 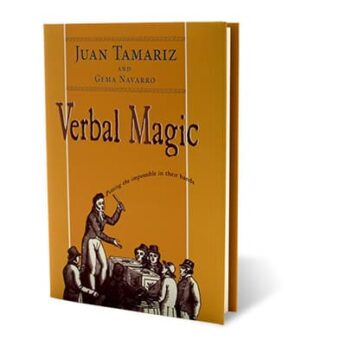