WIN OR LOSE by Wayne Dobson and Alan Wong

You show 6 chips each bearing a different word on the face: MINE, YOURS, SOMETHING, NOTHING, THIS, THAT.

Explaining that only one of the chips is the winning chip, you make a bet, placing a bank note on the table. You have some byplay on the words, with a succession of Wayne's lines, until they freely choose a chip for you (and it is a free choice); they keep the other five.

At the end you turn over their five chips and they each say LOSE. You turn over the chip they chose for you and it says WIN. You regretfully take back your bank note for another day, another bet. Everything can be examined, you are squeaky-clean. It works like a dream, and there are no multiple outs or memory work involved; Wayne's clever scripting has rendered this into a virtually self-working routine that employs comedy along the way.

On that point, Wayne offers a note of clarification: "The routine as I present it uses a lot of my lines that I've used (and published) over the years, in a variety of effects and routines. Some of them go back a long way, and I fancy I picked them up watching both Ken Brooke and Joe Riding. Colin Rose (15 years ago!) put out a routine with me called Mine which used plays on the words: 'Something & Nothing' and 'Mine & Yours'. I've seen many of these wordplay lines being 'borrowed' by other performers: occasionally with permission, usually without. A couple of good friends, Paul Martin and John Archer, have developed their own routines using plays on words, with my blessing, and even though they have some lines in there I use, I've made sure for this routine there are lines hopefully no one else is using. 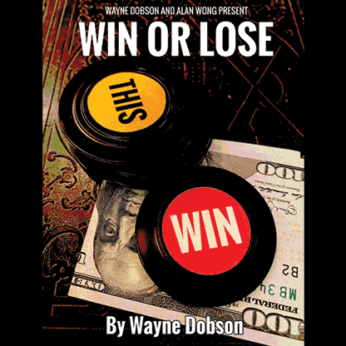 You're viewing: WIN OR LOSE by Wayne Dobson and Alan Wong $25.00
Add to cart
Create a new list