The opener from one of the busiest magicians in Latin America.

The opener from one of the busiest magicians in Latin America.

The magician says:
"Today I'm going to show you the very first trick I learned."
He shows a card folded twice.
"I want you to name any card."
The spectator replies e.g. "Six of Spades."
The magician says "I never hit" and he shows that it's the wrong card.
He says: "I've been trying this for years and I always miss," while he shows a transparent bag full of folded cards. After the laughs he says: "It's very hard to divine a card, but it's harder to catch a thought."
He throws the cards from the bag into the air -- among the "showers" of cards, he catches one folded card. He unfolds it and shows it's precisely the named one!

You perform the classic "52 on 1" gag and, as a finale, you show a prediction that matches exactly the freely thought-of card!

A spectator chooses a continent and then he freely chooses ANY country. After a very funny gag, you show a prediction that matches exactly the freely chosen country! 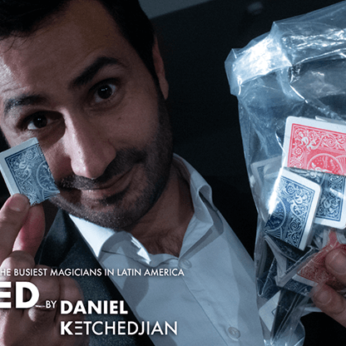 You're viewing: Catched by Daniel Ketchedjian $50.00
Add to cart
Create a new list