The greatest Ace Assembly of all time is back. Three aces visually melt into thin air and join the fourth ace—in the closed hands of your spectator!

We all have ‘that’ special memory of being utterly fooled for the first time—for Aaron it was while watching the legendary Ricky Jay perform McDonald’s Aces on Live TV.

This trick first became famous as the signature effect of one-armed magician Mac McDonald—other magicians would pay him $100 just to know the secret—and has since become the most visually powerful Ace Assembly in magic!

To this day, Aaron isn’t sure which he finds more impressive—how mind-blowing this trick is, or just how EASY it is to do!

The effect is classic. The four aces are removed from the pack and set on the table. Twelve indifferent cards are also removed, three of them placed on top of each Ace. A spectator selects one of the four-card packets, and holds on to it for safekeeping.

Then the magic happens. One by one, the other three Aces visually vanish. As if bearing witness to trick photography, your spectators will swear that the Aces are melting away before their eyes!

Of course, when the spectator examines the cards in his possession, he discover that they are none other than the four Aces!

A trick that has stood the test of time, McDonald's Aces has been outlined in great detail on this nearly hour-long DVD. Professional magician Tomas Medina teaches you every nuance of the trick. Beginners will be able to learn it in minutes, while serious students will have plenty of intermediate and advanced material to consider and practice.

Included with each copy of this DVD are the specially printed cards required to perform the trick - produced by the US Playing Card Company on Bicycle stock!

Over one dozen vanishes are taught, as well as different methods for getting into and out of McDonald's Aces. Bonus footage gives you even more food for thought and handlings to consider.

A quick survey of this DVD will have you nodding your head in agreement. If McDonald's Aces isn't the world's greatest card trick, it runs a close second. Learn it, perform it, and find out for yourself. 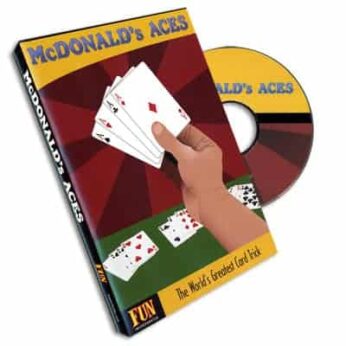 You're viewing: McDonald's Aces (With Cards) $18.00
Add to cart
Create a new list