The ultimate three card monte. Looks completely impossible. The truth? The cards do ALL the work (and you look like a master sleight of hand artist!)

Aaron performed The Skinner Monte for years before meeting Michael Skinner himself in Vegas—and even he was blown away when he watched the master performing it.

This is the most visually devastating monte we’ve ever seen—your audiences will go from frustrated to enraged to downright hysterical as you hit them with each successive phase (there’s no let-up!)

Unlike other ‘fun’ monte effects, The Skinner Monte feels like a real three card monte full of impossible sleights and moves—but in truth, the trick does ALL the work for you.

Alex has been to hundreds of  magic conventions, and there’s one thing he can always count on seeing—magicians grabbing their copy of The Skinner Monte (and to be honest, if you don’t already own it, what are you doing at a magic convention??)

Michael Skinner's vast working repertoire, larger perhaps than any other magician in history, contained some of the most difficult sleight-of-hand tricks imaginable. Yet, one of his pet tricks, a feature of his close-up act at the Golden Nugget Casino in Las Vegas where he performed for two decades, is this self-working miracle-the Ultimate 3 Card Monte.

Don't be fooled by the fact that it almost works by itself, though. Michael Skinner fried audiences with this routine and after he released the secret, the Ultimate 3 Card Monte found itself into the working repertoires of professional close-up magicians all over the world. And now-it can be yours!

Everything (except a bit of practice) is included in the package -professionally illustrated instructions, original patter, and the specially printed Bicycle-brand cards that make this miracle possible.

The Ultimate 3 Card Monte-it's the stuff of legends. 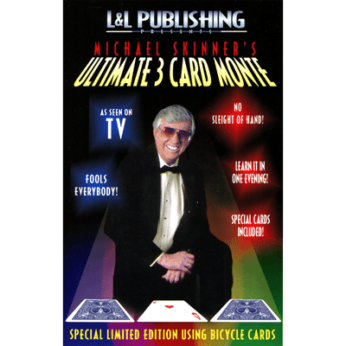