Banachek—the world’s greatest mentalist—reveals the exact techniques and methods he uses to control every audience he meets.

As a young magician, Banachek did what no other mentalist had EVER done—he fooled a team of top scientists...and even convinced them that he really was ‘psychic.’

Adam was a fan of Banachek for YEARS before he discovered Psychological Subtleties. That’s because his book is the closely-guarded ‘secret weapon’ of the greatest mentalists alive...and an exclusive book that most magicians never even hear about.

Quite simply, this book is downright dangerous in the wrong hands. It contains EVERY single technique professional mentalists use to influence—and even control—their audience, including the exact methods Banachek used to fool science.

Best of all, Banachek shows you how to use these techniques anytime, anywhere—with no preparation.

Once Adam got his hands on it, he was immersed for weeks. He was shocked to discover secrets that NO other magic book talks about—the deepest secrets of the ‘inner circle’ of magic.

Aaron isn’t a mentalist, but within the first chapter of this book he found three new miracles he added to his show instantly. In his opinion, this book is brilliant for one key reason: it shows you how to create instant miracles without learning any new tricks or complex sleights.

Psychological Subtleties by Banachek Banachek, first came to national prominence as one of two teen-age "psychics" validated by the Parapsychology Department at Washington University as part of Randi's "Project Alpha" experiment. Since then he has been buried alive on national television, caught bullets in his teeth (using his own technique, which he has since shared with Penn & Teller) and become one of the most sought-after performers in the college and corporate arenas. In this long-awaited new book, Banachek reveals the true secrets of his success: psychological subtleties that transform "mental magic" into "psychic entertainment." Most of the effects require no advance preparation and may be performed at a moment's notice. Those who have Banachek's earlier monographs will not hesitate to add this to their libraries.

From the introduction by Teller: "BANACHEK IS BRILLIANT at subtle deceptions. My partner Penn and I have repeatedly called upon his vast knowledge, diabolical ingenuity, and remarkable imagination, and have never been disappointed. This man has the goods, and now you do, too. But be careful. THIS IS A VERY DANGEROUS BOOK. In the wrong hands, these subtle, deeply devious methods could be used to convince audiences that the performer is not an artist, but a supernatural being. .." 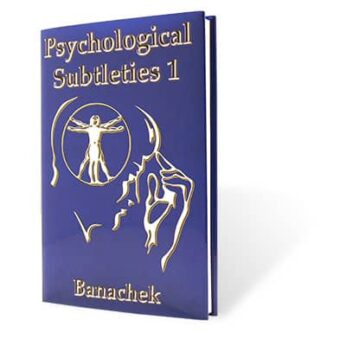